By ASSOCIATED PRESS and MATTHEW WRIGHT FOR DAILYMAIL.COM

The University of Southern California has agreed to pay an $842 million settlement to more than 700 women who have accused the college’s longtime campus gynecologist of sexual abuse, the victims’ lawyers announced Thursday.

The settlement is believed to be a record amount for such a lawsuit.

When combined with an earlier $215million settlement of a separate class-action suit that has already been paid to some of his women patients, USC has agreed to pay out more than $1 billion for claims against Dr. George Tyndall, who worked at the school for nearly three decades.

Tyndall, 74, faces 35 criminal counts of alleged sexual misconduct between 2009 and 2016 at the university’s student health center. He has pleaded not guilty and is free on bond.
During a Zoom press conference on Thursday held by star lawyer Gloria Allred, four of his victims recounted their harrowing experiences in Tyndall’s examination room.
One of his victims – named as Jane Doe – recounted how the disgraced doctor probed her private parts with his unwashed and ungloved hands during a pelvic exam in the 90s.
Allred’s firm – Allred, Maroko & Goldberg – and her co-counsel, Carpenter & Zuckerman , represent 72 of the 702 women who have come forward with allegations of harassment against Tyndall. Allred shared during the press conference that her clients would receive on average $1.2million from the payout. 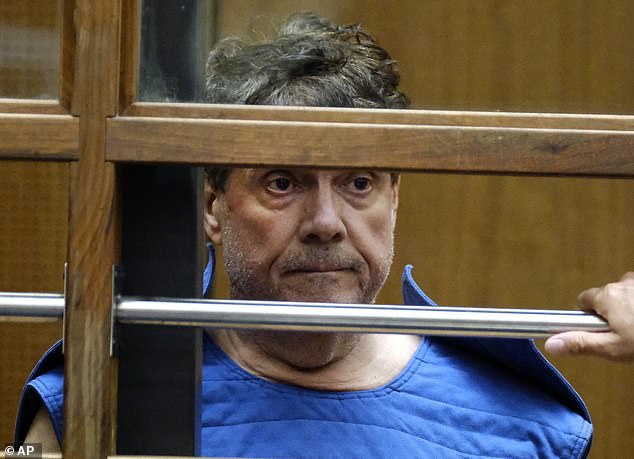 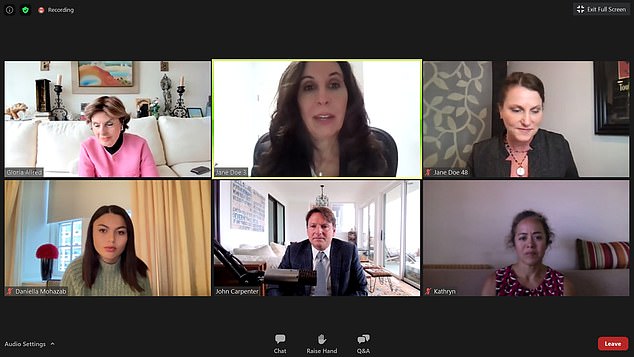 At the press conference, the woman named as Jane Doe 3 said: ‘The damage he [Tyndall] caused is incalculable.’

She described her interactions with Tyndall during a 1990 visit to the student health center as a ‘disgusting experience,’ Jane Doe said that he would make ‘crude comments’ towards her and forced her to undress while he remained in the room.

Tyndall also took photos of the woman for ‘research purposes,’ she explained as she read from the statement. Jane Doe 3 said that she requested a woman to be present for her examination – only for Tyndall to then send the female nurse away as he proceeded to do the exam.

It was then that Tyndall allegedly proceeded to touch Jane Doe 3’s private areas with ‘ungloved’ and ‘unwashed hands,’ with the woman sharing that she remembered the disgraced doctor ‘shiny and red face’ watching over her as he fondled her.

‘I felt so violated that I didn’t go back to a gyno for five years afterwards,’ Jane Doe 3 said as she wept.

Jane Doe 3 said that she did not initially consider Tyndall a sexual predator, believing that the abuse was the result of something she did and that she had ‘invited him to act inappropriately.’

‘In other words i blamed myself,’ the woman added, asserting she was left ‘shocked and horrified’ upon learning that the abuse continued to a generation of women after her.

‘USC knew about this predator and did not stop him from abusing women,’ the woman said.

Hundreds of women came forward to report their allegations to police but some of the cases fell outside the 10-year statute of limitations, while others did not rise to the level of criminal charges or lacked sufficient evidence to prosecute. Still, he faces up to 64 years in prison if convicted.

Another woman at the press conference – Jane Doe 48 – described herself as one of Tyndal’s ‘original’ victims and said that the doctor displayed ‘a pattern that he continued to employ to gain the trust of and harm young Trojan women over decades.’

The woman shared that she first encountered Tyndall as a 17-year-old who went to the center for her ‘first well-woman exam’ in 1989.

‘Tyndall’s grooming started immediately, with him noticing my nervousness and being overly reassuring and solicitous,’ the woman shared. ‘He quickly gained enough of my trust to learn that I was on my own, poor, and very inexperienced.’

She added: ‘He told me not to worry, that he would take care of me. He talked about all of the “trouble” a girl could get into in college and said that I needed to tell him everything I was doing sexually so he could protect me.

Jane Doe 48 said that she had a lot of appointments with Tyndall, where he routinely ‘implied that all college women are promiscuous’ and adding that that was why ‘he had to take such good care of us.’ 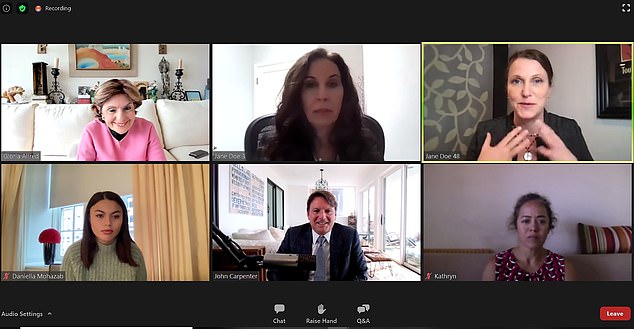 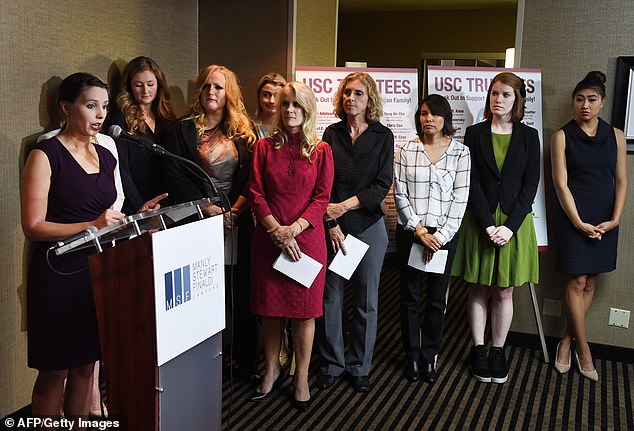 A group of current and former USC students at a press conference in 2018, sharing their allegations against him

‘I started having mental health issues. I sought help and was told that I showed signs of sexual trauma,’ she said. ‘It was the early ’90s and there was a lot of talk about ‘repressed memories.’ I spent a great deal of time and resources trying to figure out if I had been raped as a child. This, while Tyndall continued his abuse.’ 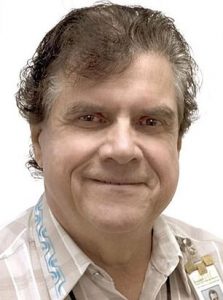 Tyndall was a gynecologist at the school for 30 years

‘This settlement shows institutions everywhere that there is a great price to pay if they choose to ignore abusive doctors,’ Jane Doe 48 asserted. ‘It’s past time to bring patient voices fully into the design and oversight of reproductive healthcare and it is my hope that this settlement will provide the motivation needed to make that happen.’

Tyndall’s attorneys could not immediately be reached for comment Thursday.

In 2018, Michigan State University agreed to pay $500 million to settle claims from more than 300 women and girls who said they were assaulted by sports doctor Larry Nassar.

That settlement was considered the largest at the time, far surpassing the $100 million-plus paid by Penn State University to settle claims by at least 35 people who accused assistant football coach Jerry Sandusky of sexual abuse.

Separately, USC earlier agreed to pay $215 million to settle a class-action lawsuit that applies to about 18,000 women who were patients of Tyndall’s.

The individual payouts to those victims range from $2,500 to $250,000, and were given regardless of whether the women formally accused Tyndall of harassment or assault. The final payouts are expected to be issued this month.

Allegations against Tyndall first surfaced in 2018 in an investigation by the Los Angeles Times, which revealed that the doctor had been the subject of complaints of sexual misconduct at USC dating back to the 1990s. 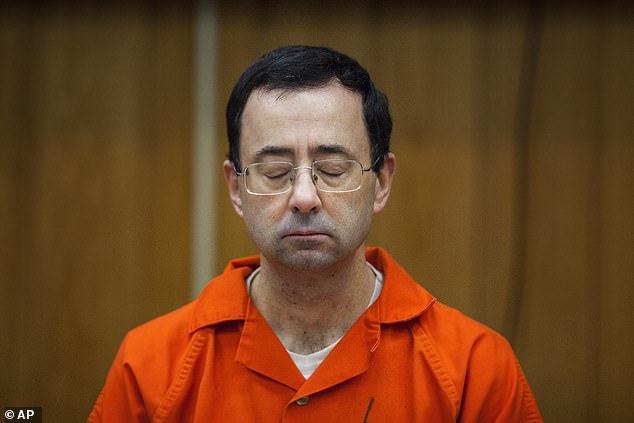 In 2018, Michigan State University agreed to pay $500 million to settle claims from more than 300 women and girls who said they were assaulted by sports doctor Larry Nassar

He wasn’t suspended until 2016, when a nurse reported him to a rape crisis center. He was able to quietly resign with a large payout the next year. Tyndall was fired by USC in 2017.

Files released to The Los Angeles Times as part of a Freedom of Information request showed the college hired a firm to carry out an investigation in 2016.

The report found in part that Tyndall was targeting Asian women who didn’t have a good grasp of the English language and were unfamiliar with gynecology. 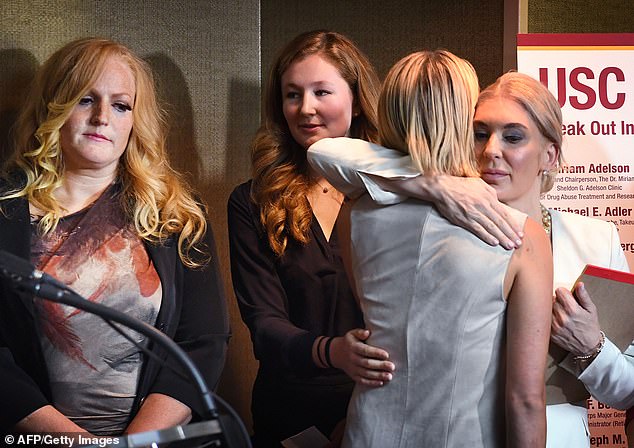 Former USC students who are survivors of alleged sexual assault by gynecologist Dr. George Tyndall from the USC student health center and which occurred over a 30 years period, comfort each other during a press conference in Los Angeles, California on October 18, 2018

‘If the patients were young and Asian, they were more likely to have a pelvic exam completed,’ it said.

The report also stated the pelvic exams were outside the realm of standard medical practice, adding Tyndall had ‘dangerous opinions’ about breast exams.

It also found that he had been photographing patients’ genitals and using a lab in upstate New York to develop the images.