Attorney John Carpenter of www.czrlaw.com is representing William Gonzalez, whose eye “exploded” when he was struck with a hard-foam police projectile as he celebrated the Lakers’ NBA title.

See below for more details and follow @TruthLovJustice for updates.

When the hard-foam police projectile struck 22-year-old William Gonzalez in the right eye as he celebrated the Lakers’ NBA title in downtown Los Angeles on Sunday night, it shattered his eye socket, ripped apart his tear duct and “exploded” the eyeball itself, doctors said.

The Kobe Bryant jersey that his brother Michael used to stanch the bleeding was immediately soaked as Michael dragged Gonzalez through the streets, trying to find a way out of the chaos.

“My brother … grabbed me and said ‘Run!’ because they were still shooting,” Gonzalez said Tuesday, one day after extensive reconstructive surgery.

Others also were badly injured in the area around Staples Center, where the LAPD declared an unlawful gathering as storefronts were being damaged and officers targeted with thrown bottles and other items. One man lost eight teeth when a projectile struck him in the mouth. 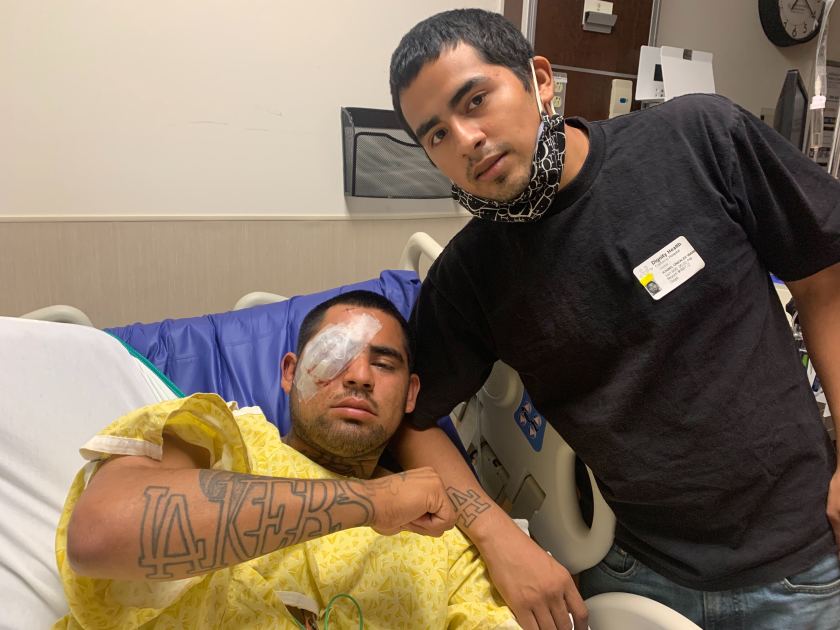 The injuries Sunday add to a growing list of people hurt by LAPD hard-foam and other “less lethal” projectiles, as the LAPD calls them. Police say the weapons are an effective way to disperse crowds that have become violent.

But some of the claims made by police about the weapons — that the rounds don’t “penetrate the skin” and that officers don’t aim at the head or other sensitive body parts — are coming under growing scrutiny after a series of incidents over the last few months, some caught on video. The cases have brought calls from activists that the Los Angeles Police Department stop using such weapons for crowd control and have placed pressure on the department to explain the injuries.

An investigation by The Times into police force at mass protests this summer found multiple examples of people being badly wounded by the weapons — with bloodied eyes, head wounds and damaged testicles, among other injuries.

The continued wounding of people in crowd-control situations has come despite litigation over the use of projectiles and settlements that reined in the practice — forcing the LAPD and the city to agree to stricter protocols for how and when the weapons are used.

Under current policy, the foam rounds must only be aimed at the belt line of a targeted individual who represents a threat to officers — not fired into crowds, at fleeing people or at those who don’t represent a threat. They are never meant to be aimed at people’s heads or necks.

In addition to Gonzalez, at least two others were hospitalized Sunday with head injuries. Manuel Barrientos, a 25-year-old part-time photographer, lost eight teeth and part of his lip when he was shot in the mouth, his family said.

“He turned around, stepped out into the street to take a picture with his camera, and that’s when he felt something hit him,” said Barrientos’ brother Jose Meza. “When he looked down, he saw a little piece of his lip on the floor and he was dripping blood from his mouth.”

A third man who asked to remain anonymous to avoid attention as he considers litigation told The Times that he and his partner were watching the festivities but steering clear of “the particularly rowdy people out there” when he too was struck in the face — causing a laceration across this right cheek and fracturing a bone around his right eye.

“I was completely blindsided,” the 34-year-old downtown resident said.

This summer, amid social justice protests across the nation, LAPD officers shot a man in the head who was standing with his hands raised, as well as a man holding a protest sign who was shot at close range in the testicles.

The LAPD is being sued by those individuals and a collection of other summer protesters and activist groups. In the largest lawsuit, led by Black Lives Matter-Los Angeles, the plaintiffs are seeking a permanent injunction barring the LAPD from using such weapons for crowd control, with an attorney for the group saying the weapons are designed not to disperse people but to “incapacitate” them.

Police officials repeatedly have said that the videos — some their own, from officers’ body cameras — show a fraction of time and can leave out critical context. Often, factors missed by the footage help explain the use of force in question, they said. Police say individuals who claim to be neutral observers in a crowd sometimes turn out to have posed a threat or may have been near someone who did.

The LAPD has said it will investigate each of the incidents in which individuals were hospitalized as a result of officers’ actions Sunday, when 76 people were arrested — one on suspicion of vandalism, two on suspicion of assault on an officer and 73 on suspicion of failure to disperse. Eight officers were injured in the clashes and are recovering, officials said.

But police have resisted calls for projectile launchers to be banned from crowd-control operations, claiming that the weapons are a crucial piece of their less-lethal arsenal — able to help quell violent, dangerous and destructive situations without relying on more serious force.

But those who have been injured, as well as their advocates, say the reality is that the projectiles are potentially deadly — and that LAPD officers have proved they are not using them as instructed.

The results are devastating, said Gonzalez’s eye surgeon, Dr. Linden Doss, who spoke to The Times with Gonzalez’s permission.

The damage was extensive, Doss said, as if Gonzalez had been struck by a bat and bitten by a dog all at once. He will never see out of his right eye and will probably need to have it removed to avoid the threat of losing vision in his good eye through a phenomenon known as sympathetic ophthalmia — a process by which the immune system begins to attack both eyes if one is traumatized beyond repair and remains in the body.

Dr. David Samimi, who operated on Gonzalez at California Hospital Medical Center along with Doss, said Gonzalez’s injury was “so severe that the best-case scenario is that he still gets to keep the eye in his head without any sight whatsoever.”

“But in all likelihood, we are going to have to remove the eye,” Samimi said. “The eye itself just kind of exploded, and the tissue on the inside of the eye was extruded out.”

According to the Gonzalez brothers, they had just gotten some food at a taco truck around the corner from 9th and Flower streets when Michael sat on a curb to eat and William moved into the crowd to watch “everybody have fun,” he said.

Then, “out of nowhere I just heard shots,” William Gonzalez said. He cannot remember much of what happened next.

Michael Gonzalez, 21, said that when the commotion began, he couldn’t see his brother. Then he heard him screaming.

“I kept hearing my name getting called out and I was running to the voice,” Michael said. “It wasn’t that far, but with people running everywhere it made it hard for me to find him.”

When Michael finally reached his brother, he was in a panic.

“I immediately took off my Lakers jersey to put on his eye to support it and stop it from bleeding, but it wasn’t helping at all,” Michael said. “The shirt was full of blood.”

The brothers said they tried to flee, at one point reaching a line of California Highway Patrol officers. At first, the officers pushed them back, the brothers said, before directing them to one area and then another to get picked up by an ambulance.

They said they sat on the ground for half an hour before an ambulance arrived and William Gonzalez was rushed off.

Not far from where Gonzalez was injured, Barrientos too was hit by a police projectile.

According to Meza — Barrientos’ injuries left him unable to speak Wednesday — his brother had gone downtown to take some pictures when he heard an LAPD dispersal order. He walked off as instructed, Meza said, but turned around to take another picture when he was struck.

Noting the severity of his injuries, others around Barrientos tried to assist him before police took him behind their line, Meza said. He then sat on the ground for half an hour before an ambulance arrived.

“There is absolutely not a safe way to use these projectiles,” Doss said, echoing the belief of many who have called for an end to their use. “These things should not be legal.”